Brief encounters with the movies 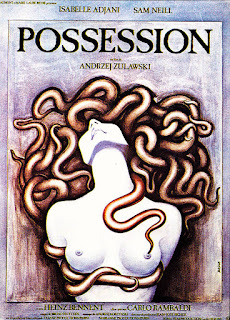 
...this challenging and highly unusual drama stars Isabelle Adjani as a young woman who forsakes her husband (Sam Neill) and her lover (Heinz Bennent) for a bizarre, tentacled creature that she keeps in a run-down Berlin apartment. In the beginning, her husband knows nothing about the monster and sincerely believes that his wife is insane. He has her tailed by private detectives, whom she kills and feeds to the creature. Still unaware of what has happened, the husband contends with the reserved and inadvertently seductive presence of his wife's look-alike (also played by Adjani), a schoolteacher who frequently comes to tutor his son while his wife is away. Though tempted by her quiet goodness and beauty, he is still passionately in love with his wife and even after he finds out about the murders, he stays by her side and helps her conceal her crimes.

Definitely in the running for Worst Movie Ever Made. One star for the presence of Sam Neill. Run, run as fast and far away as possible from this mess.

My Rating at the IMDb: 1 star out of a possible 10 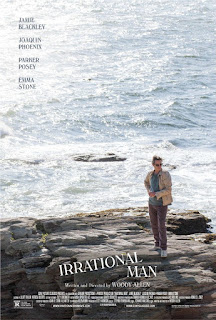 
When a burned-out, brilliant professor — one who believes in lessons from life rather than textbooks — takes a job at a small college, everyone there is abuzz. He becomes involved with a teacher as well as a precocious student, but it takes a dramatic, existential act to turn his life around and make him see the world through a much rosier and more positive perspective.

Maybe I should just give up on Woody, at least until he gets over his Emma Stone infatuation. Something about the girl just makes me want to be somewhere else. There were some interesting ideas in this one, but they got lost in the overall silliness. Joaquin Phoenix is a fine actor, but he's out of his depth as a philosophy professor, "tormented" or otherwise. (And what's with that beer belly? His stomach almost qualified as another character.) But Parker Posey was a bright spot. Please, Woody — no more deep-thought experiments.

My Rating at the IMDb: 4 stars out of a possible 10

Queen of the Desert 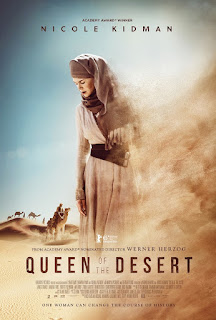 
...the extraordinary true story of a trailblazing woman who found freedom in the faraway world of the Middle East. Gertrude Bell (Kidman) chafes against the stifling rigidity of life in turn-of-the-century England, leaving it behind for a chance to travel to Tehran. So begins her lifelong adventure across the Arab world, a journey marked by danger, a passionate affair with a British officer (James Franco), and an encounter with the legendary T.E. Lawrence (Robert Pattinson). Stunningly shot on location in Morocco and Jordan, Queen of the Desert reveals how an ahead-of-her-time woman shaped the course of history.

I had doubts going into this, since Nicole Kidman is not one of my favorite actresses and I'd read that she was in virtually every scene. She was not terrible, but I do think the movie would have been better with someone else in the lead. Kidman is very wooden, too old for the early part of the story, too stiff for the rest. And she's taller than just about everyone else in the film. You'd think they could have put some of the other actors on a box or something. Still, the desert was absolutely gorgeous and was, after all, the real star of the show.

My Rating at the IMDb: 5 stars out of a possible 10

The Watcher in the Woods 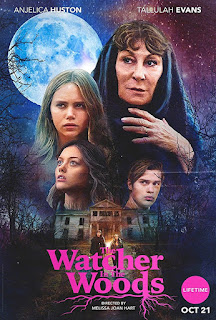 
Mrs. Aylwood (Anjelica Huston) is a distraught mother since her daughter, Karen, vanished in the Welsh countryside 30 years ago. When the Carstairs family move into the Aylwood manor for the summer, strange occurrences begin to unnerve the family and Jan Carstairs (Tallulah Evans) begins to suspect that they are linked to Karen's disappearance. As Jan unravels the dark past hidden by the townspeople, she delves further into the mystery and deeper into danger, but now it might be too late to escape the Watcher in the Woods.

Remake of a cult classic from 1980. Lots of problems here (and lots of "borrowings"), although the atmosphere was nice. Reminded me of those PBS After School Specials I used to watch sometimes, back in the '90s. Melissa Joan Hart's first time directing a feature-length film, I believe. Room for improvement, but shows potential. How did she rope Anjelica Huston into this project?

My Rating at the IMDb: 2 stars out of a possible 10 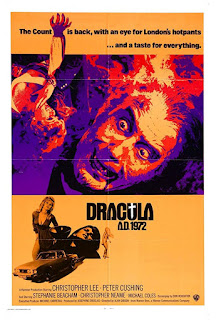 
...in ultra-mod '70s London, Count Dracula (Christopher Lee) is revived after 100 years by a gang of devil-worshipping swingers led by the not-so-cleverly-named Johnny Alucard (Christopher Neame), and later joined by Jessica (Stephanie Beacham), granddaughter of the legendary vampire hunter Dr. Van Helsing (Peter Cushing, returning to the role after more than a decade). After the group manages to resurrect the Count, he sets about the task of destroying the house of Van Helsing once and forever, leading to a battle in a de-sanctified cathedral. Despite some well-staged scenes, a thrilling prologue (involving a tense battle between Lee and Cushing aboard a runaway coach) and the presence of the stunning Caroline Munro, this is definitely one of the weaker entries in the series, and the script gives Lee very little to do with the hissing, red-eyed villain.

Wow! Who knew vampires were so groovy? Not much of interest here. Peter Cushing turns in a decent performance, as always. But by 1972 Christopher Lee was 50 years old and had been playing Count Dracula for at least 15 years. It's a little disturbing to see the Count aging, since he's supposed to be immortal. One of Stephanie Beacham's earliest films, and she was lovely to watch. (And so were her breasts.)

My Rating at the IMDb: 2 stars out of a possible 10 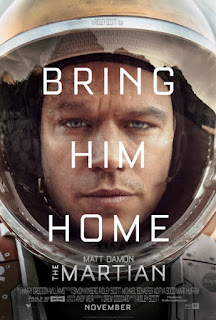 
During a manned mission to Mars, Astronaut Mark Watney (Matt Damon) is presumed dead after a fierce storm and left behind by his crew. But Watney has survived and finds himself stranded and alone on the hostile planet. With only meager supplies, he must draw upon his ingenuity, wit and spirit to subsist and find a way to signal to Earth that he is alive. Millions of miles away, NASA and a team of international scientists work tirelessly to bring "the Martian" home, while his crewmates concurrently plot a daring, if not impossible rescue mission. As these stories of incredible bravery unfold, the world comes together to root for Watney's safe return.

A team of astronauts on a mission to Mars, forced to evacuate the planet, have to leave Matt Damon behind. How disturbing! This was a really good sci-fi flick. One of those instances where the hype was well deserved. No bug-eyed monsters or slime bombs, and no comic book style villains -- how refreshing is that?

My Rating at the IMDb: 7 stars out of a possible 10 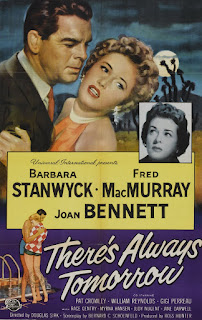 
Fred MacMurray is a toy company executive whose wife (Joan Bennett) and kids (Gigi Perreau, William Reynolds and Judy Nugent) take him for granted [boo-hoo]. Barbara Stanwyck is Fred's former girlfriend, whose own business activities result in a surprise reunion. MacMurray falls back in love with Stanwyck and prepares to leave his family. MacMurray's children go to Stanwyck and politely ask her to back off. She does so, and MacMurray's wife Bennett, who's been out of town during all this, is none the wiser.

Another post-war film championing the cause of getting women out of the workplace and back into their aprons. Well, who wouldn't jump at the chance to trade a successful career in fashion design for the life of a household drudge?

Mainly interesting because of the pairing of MacMurray and Stanwyck once again.

My IMDb Rating: 5 stars out of a possible 10